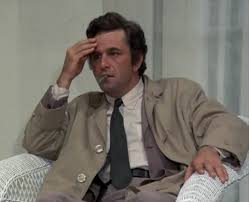 In literature, the Fool is the character who can tell the truth at all times. He has that freedom because his medium is humor. Add to that an acute level of self-deprecation.  He doesn’t take himself too seriously, nor hold himself up high and as a result people, kings in fact, listen to him and seek his counsel.

We need people to tell us the truth.  But we won’t always pay attention to the feedback coming our way.  Our veneer of protection is frequently a portrayal of ourselves as ‘in command’, ‘totally together’ and we can’t show what we believe would be weakness if we admitted that we do in fact need feedback, support, advise, coaching, etc.

Earlier in my career when I was a sales person, I attended a set of training sessions.  One of the key techniques was the “Columbo” persona.  The premise was that when we are too slick and polished or have a know it all attitude, the people with whom we most need to communicate are so guarded and self protective that our message never gets through and true dialog about needs and solutions can’t take place.  When we seem to need a little help, the natural tendency that humans have to aid those in need kicks in.  On the old TV detective show, Lt. Columbo was slightly disheveled and seemingly disorganized.  Forgetful and eternally apologetic, he lulled the killers into letting down their guard and revealing the clues and evidence needed to convict them.

The teams we lead will grow in cohesion and effectiveness when we let down our facade of false perfection and allow those around us to be ‘truth tellers’.  When we show that we are open to the feedback from all 360 degrees of our environment, including supervisors, peers, employees, customers and others, we demonstrate that the fool is the one avoiding the truth, not the one presenting the truth.